Should You Retake the SAT/ACT? Four Questions to Help You Decide 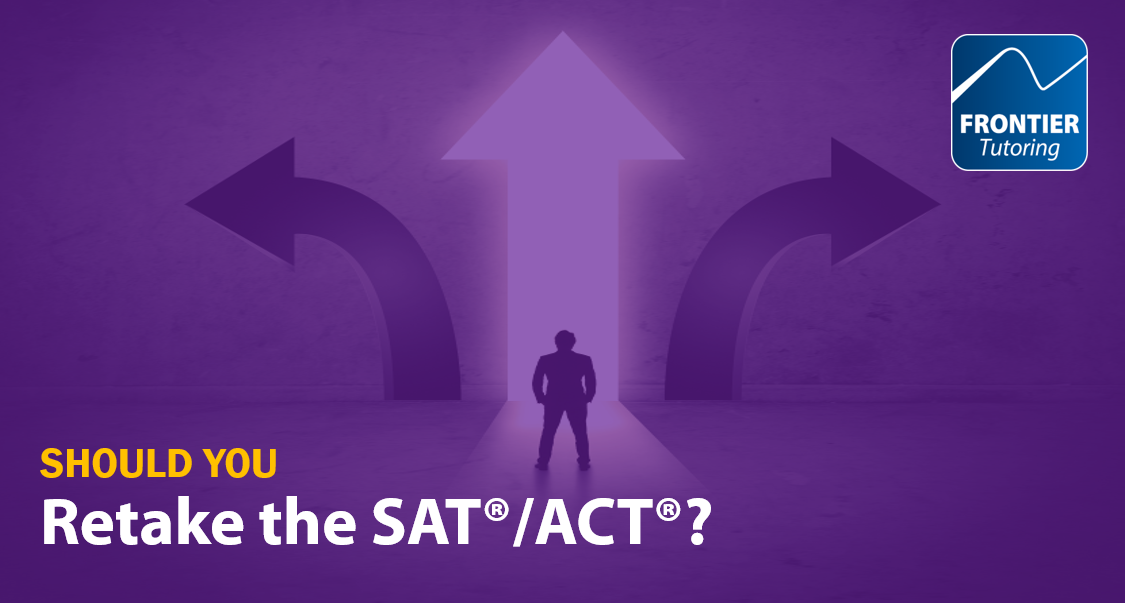 While everyone hopes they'll be able to take the SAT or ACT just once and be done with the process, the reality is that about half of all students take the official test again—even if they had completed an SAT/ACT prep program before their initial testing attempt.  If you’ve taken the official SAT or ACT, and your score has left you wondering whether you should retake the test, what should you do next?  We'll help you answer that question in this post.

When to Prepare for and Take the SAT/ACT: 3 Questions to Help You Decide. 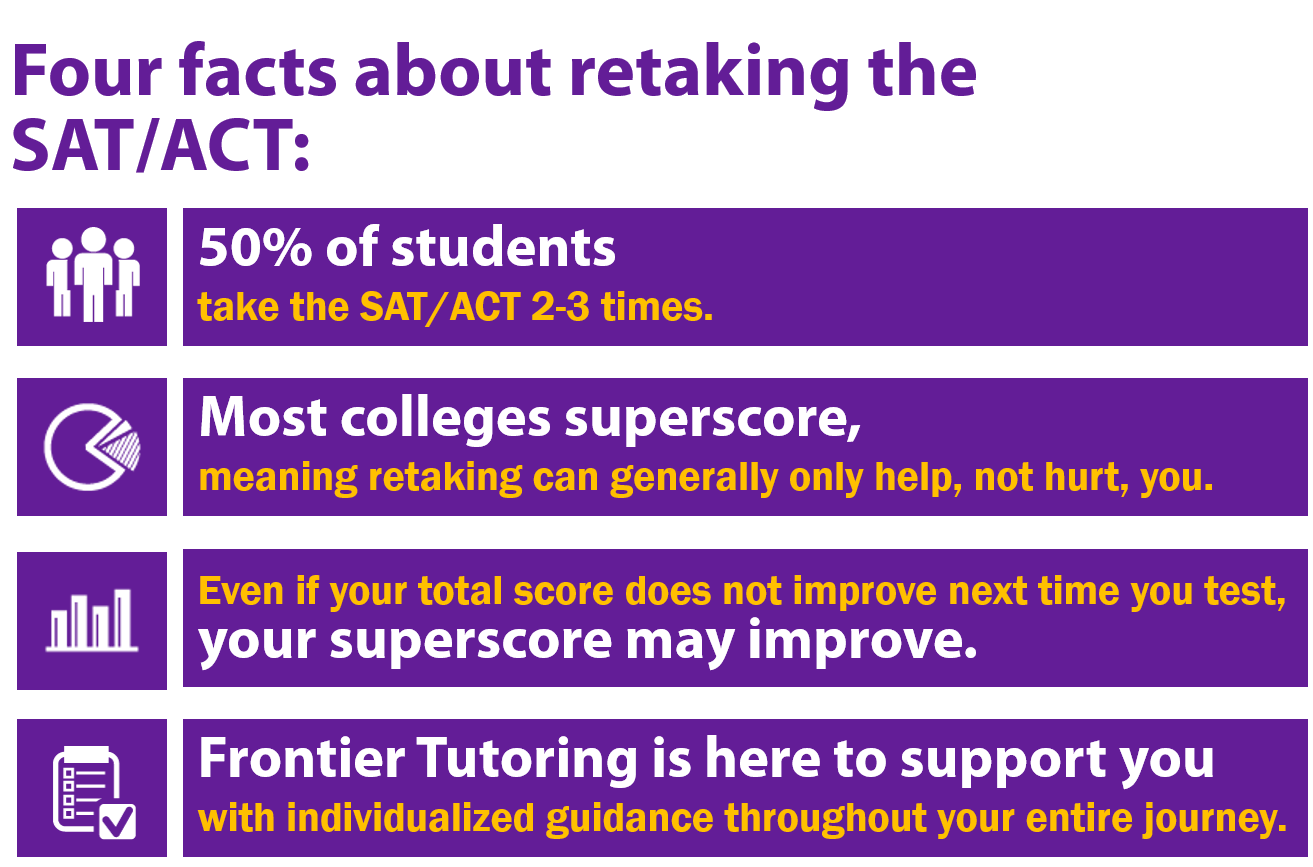 Take a deep breath.  While some students are satisfied with their SAT/ACT score after their first testing attempt, around 50% of students take the test two or three times.  Students in both groups can be equally successful in college admissions.

Unless you are interested in one of a select group of colleges, the majority of colleges evaluate your highest SAT/ACT score for admissions purposes, meaning retaking the test once or twice can generally only help, not hurt, you.

Even if you retest and your total score doesn't improve, your superscore may still increase, as we illustrate below.

Know that, if you completed your initial preparation with Frontier Tutoring, we are here to support you.  We will prepare an individualized action plan for you based on your test prep history, test score history, and college admissions goals, using the framework described in this post.  The action plan may include:

With an appreciation for this background, how should you decide the best next step for you?  We’ve prepared this explainer, based on the academic research1 and our own experience working with thousands of Alaska students on SAT/ACT prep, with four questions to help you decide whether you should retake the SAT/ACT:

Do you have good reason to believe you’ll perform better on your next testing attempt?

Reason 1A: You plan to complete additional preparation

The take-home message of this paragraph is that you might increase your score nominally on a retake simply due to your increased familiarity with the test—but for substantial gains, you need to do more to prepare. While a recent study suggested that students increase their SAT score by an average of 30 points (adjusted to the current 1600-point SAT score) upon their first retake, the study does not evaluate what caused that improved performance.  Students improve during retakes due to some combination of: (i) additional preparation, (ii) increased familiarity with the test, (iii) an increased fund of knowledge from additional months of years of exposure to math and English classes, and (iv) compensating for abnormally low performance during “fluke” testing attempts (see 1B below).  Frontier Tutoring students have generally already taken at least two full-length practice SAT/ACT tests before taking the official test, so additional performance gains arising from familiarity with the test alone are likely to be limited.

Reason 1B: You can demonstrate that you had an "off" official test day 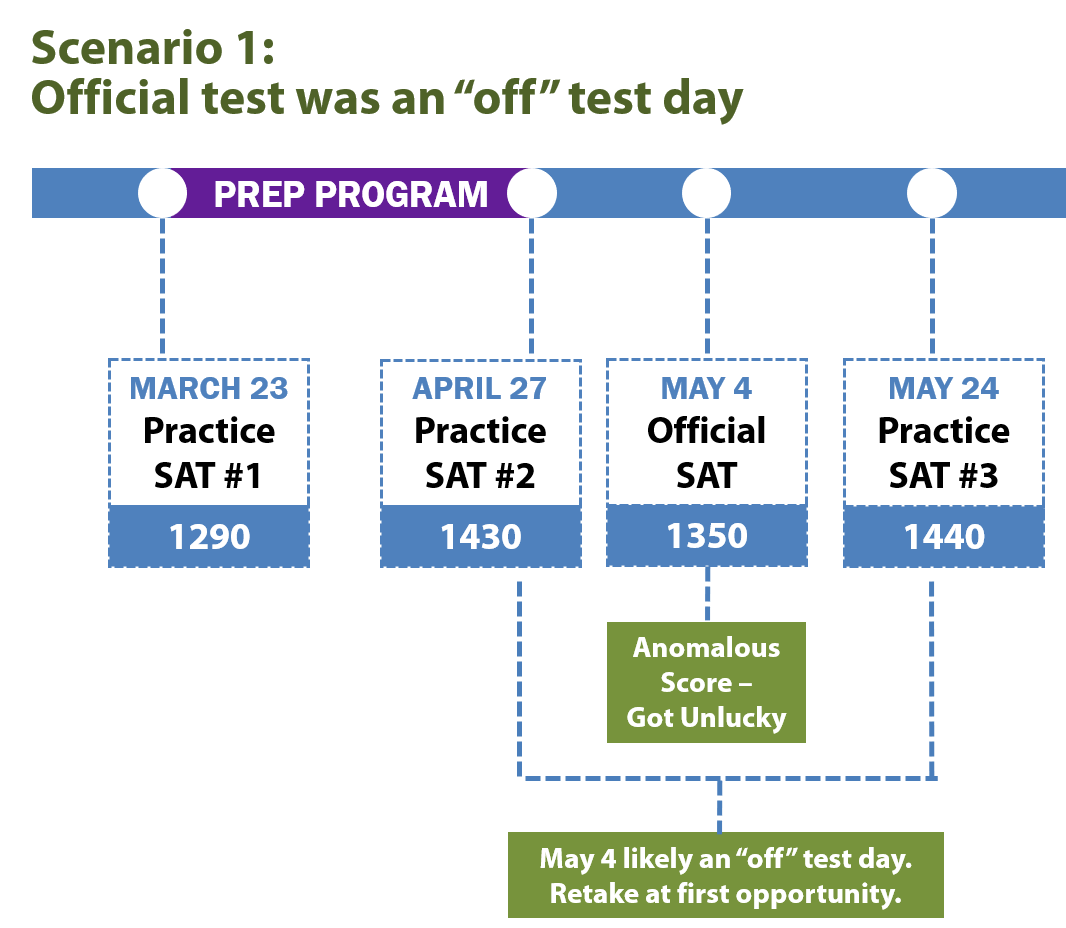 Look at the graphic above.  This student scored a 1350 on her May 4 official SAT—significantly below her score of 1430 on the practice SAT she took on April 27.  She takes another full-length practice SAT on May 24, scoring a 1440, which is consistent with her April 27 practice SAT.

Diagnosis: Lower-than-expected official SAT score was the result of an "off" test day on the official test.

Recommendation: Retake the SAT only if you are willing to complete additional preparation.  Merely taking the test again, without further studying, is unlikely to yield meaningful gains (see "Reason 1A" above).

Do many or all of the colleges you’re targeting have a superscore or "highest sitting" policy for multiple tests?

Let's dissect this question so you understand how to answer it.

There are several ways colleges evaluate scores from multiple tests

If you take the SAT/ACT two or more times, it's important to understand how colleges will view and consider your scores.  Colleges generally follow one of three policies when evaluating your scores from multiple test sittings:

As of 2015, 75% of four-year colleges responding to a College Board survey claimed to use the student’s maximum score for admission evaluation.  80% of those colleges defined that maximum score as the “super score” (Policy C), while the remaining 20% of those colleges presumably considered the highest total score from a single sitting (Policy B).  A more recent Princeton Review survey found that 90% of colleges superscore the SAT, while 68% of colleges superscore the ACT.  Check each college you may be interested in to understand its individual policy for multiple test scores.

Here's the beauty of superscoring.

Take a look at the graph below, which represents the actual official testing history for one of our SAT prep students.  As you can see, she took the official test three times: in June, August, and October.  Her total scores remained roughly the same across all three test dates—yet her superscore improved by 50 points over her initial June score.  For this reason, 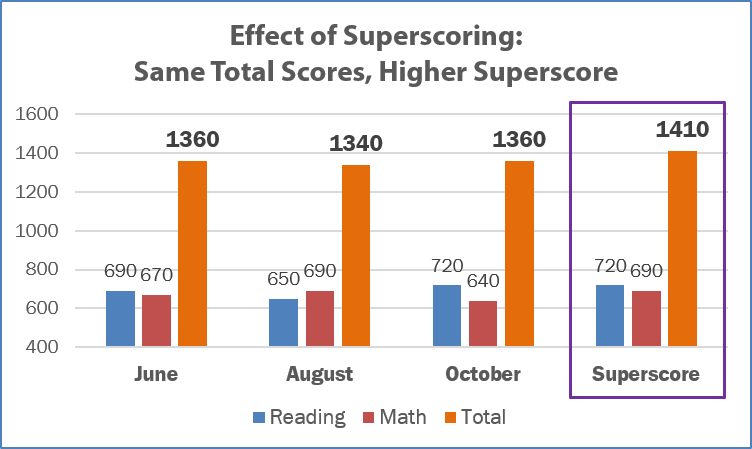 So why does any of this matter?

If you happen to be a student who is extremely interested in schools that evaluate (or even view) all scores, then you need to be more judicious about multiple testing attempts, particularly beyond your second or third official test.  Otherwise, you have little to lose by retaking the test, and potentially a lot to gain (assuming you prepare appropriately)!

Do you have no more than three official test attempts under your belt already?

Taking the official test no more than approximately three times is a general guideline, not an absolute rule.  At schools that allow you to use Score Choice, and at schools that superscore, it’s technically true that you may be able to test as many times as you wish without an admission penalty.  However, there are two reasons we recommend against adopting a “more is better” mindset beyond three or four official testing attempts.  First, certain colleges (especially selective colleges, such as Georgetown and Yale) require applicants to submit all scores.  Depending on the school’s admissions philosophy, admissions officers may perceive too many SAT/ACT attempts as an excessive focus on testing.  A significant number of testing attempts might also cause admissions officers to question the student’s true capabilities, especially if the score trend does not demonstrate consistent improvement.  Be mindful of these considerations if you're considering such colleges.  Second, there is an opportunity cost to retesting: taking additional practice tests, completing additional preparation, and retaking the official test all require significant time—time you won't be able to invest in other aspects of your applicant profile, such as extracurricular activities, application materials, and grades.

Is your score at least 40 SAT points/1 ACT point below your college admissions target score?

Again, this is not a firm rule, but a starting point for a conversation.  Ultimately, the gap between your present and target score that justifies retaking the test depends greatly on context.  For example, if you scored a 1420 on the SAT and your target score is 1440 (the median score for admitted students at Georgetown, your top-choice school), here’s how you might think about what to do next:

Note: If your sole priority is to qualify for the Alaska Performance Scholarship (or a similar program with firm score thresholds), then the guidance above is less applicable.  Instead, you should generally take the SAT/ACT as many times as necessary to reach your target score, provided you are preparing appropriately between each testing attempt.

Ready to Talk More in Depth About Your SAT/ACT Retake Strategy?

Get started with North to My Future, your free, individualized college admissions strategy session.  If you have already completed North to My Future, please contact us, and your Student Success Manager will help you assess whether and when to retake the SAT/ACT; if you do decide to retake the SAT/ACT, your Student Success Manager will work with you to develop an individualized action plan to prepare for your next testing attempt.  We look forward to working with you.

About Our College Counseling Practice

Get College Admissions Insight by Email